Our Hero – BALDY OF NOME 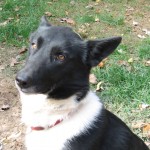 Thus far you have met our heroes Martin Buser, Bruce Linton, Balto and Togo. You have read about their great skills, determination and perseverance. Our hero, Baldy of Nome, has accumulated equally impressive accomplishments. Have you noticed that some of our heroes are from current times, some are from the recent past and some are from long ago in the gold rush days of early 1900? I guess the past is important and I’ve learned it’s really fun to learn about the past by studying history. Elders Baffin, Holstein and Tikchik provided a definition of a hero in my last story. For this story, I asked Black Jack to define hero. Black Jack is a big, no nonsense sort of dog. He always gets right to the point. He’s not only a leader, he’s wise and he’s the alpha dog of our kennel. All of the dogs respect Black Jack. When I first came to Just Guts, I knew he’d be a great friend and teacher. According to Black Jack, a hero is a dog (or person) who is respected for incredible accomplishments in adverse conditions. Black Jack also added his B-HOOPS theory. Heroes turn barriers into hurdles, obstacles into opportunities and problems into solutions. Isn’t Black Jack awesome?

Back in the days of the gold rush in Nome, a young boy by the name of Ben had a dog named Baldy. Times were tough for Ben and his family. Often they didn’t know where their next meal would come not to mention food for Baldy. In a great act of personal sacrifice, Ben put Baldy up for sale. Renowned musher, Scotty Allen purchased the homely mutt not so much for the dog’s potential as a racer but because he felt sorry for Ben. As Baldy trained with the other Allen dogs, Scotty saw in him a deep desire to please and excel. During the 1909 All Alaska Sweepstakes, in a blinding storm on hazardous trail, Scotty moved Baldy to lead – exactly where the dog longed to be. Pulling with all his strength, Baldy led the Allen team to their first Sweepstakes Victory. Murphy & Haigh tell us in Gold Rush Dogs, “Baldy proved himself to be a strong, faithful and willing leader.” Altogether, Baldy and Allen earned 3 victories and 5 other top three Sweepstakes finishes along with numerous victories in other races. But wait, it gets better!

It’s the Solomon Derby, a race run from Nome to Solomon and back. Baldy is in lead and the team is making good, if not great time as they near the turn around point of Solomon. Baldy senses that the sled is lighter than usual and notes that Scotty hasn’t been singing and talking to the dogs as he usually does. Baldy, overcome by the feeling that something was wrong, stopped the team and looked back to find that Scotty was missing. Swiftly, Baldy turned the team and sled around and headed back down the trail in search of their missing musher. A short distance back, they found him lying unconscious on the trail, bleeding from a gash in his head. Baldy hovered over his master, licking his face, pawing his chest and barking. It took some time but Scotty finally opened his eyes. It took a great amount of effort for him to crawl into the sled and then in a weak voice he told Baldy to turn around toward Solomon and continue the race. Slowly, everything came back to Scotty – as they were moving speedily along, he had heard something snap – bending over to inspect a runner – BAM, the lights went out. Scotty’s head had collided with an iron trail marker he never saw coming.

With an injured Scotty in the sled, Baldy and the rest of the team made it to the halfway point of Solomon ahead of all the other contestants. Everyone urged the dazed and still bleeding Allen to withdraw from the race. But quit was not a part of Allen’s vocabulary. He simply said, “Baldy and I can make it.” Indeed they did – they raced back Nome and took first place.

You can read about Baldy in Gold Rush Dogs by Murphy and Haigh. For a detailed and exciting story of Baldy’s life, you should read Esther Birdsall Darling’s Baldy of Nome. You can read it online like Black Jack and I did at www.gutenberg.org.

Well, there you it – our hero, Baldy. Wow, what a dog – he saved his musher’s life!  Stay tuned for our next hero, Granite. Remember, do your best everyday to turn problems into solutions.