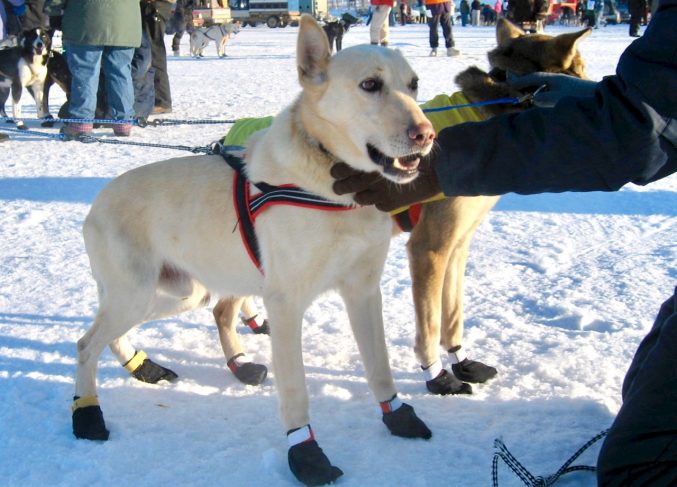 It was Iditarod 2004. Sue Allen out of No Snow Kennel in Wasilla, Alaska was about to start her rookie Iditarod. It was an exciting time – one that she and her dogs had been working and training toward for a long time. Together Sue and the dogs had logged well over 2,500 miles and were looking at covering 1049 more before reaching Nome. Iditarod being a huge undertaking by anyone’s standards.

Sue and the team were off and running toward Nome. It wasn’t far into the race when she noticed that one of her dependable leaders was favoring a front leg. The dog had a sore wrist, a recurring injury. Sue dropped the dog at an early checkpoint. After a six-hour rest, the team was back on the trail. The dogs ran well through the next couple of checkpoints but soon the two remaining lead dogs began to show signs of sore wrists. Sue dropped her last two leaders. She was down to 13 dogs with no proven leader. What to do?

Sue turned to dogs she thought would accept the leadership role but after trying most of the remaining 13 dogs – not one dog met the challenge. Now to make matters worse, the whole team including Sue came down with the stomach flu at Rohn. Things were looking grim. Sue didn’t see any chance that they’d make it to Nome. She revised her race strategy and took her 24 hour required rest at Rohn. Twenty-four hours later everybody was feeling better. Now to find a leader.

There was one dog that Sue hadn’t taken to the front of the team – Gopher. Sue had her doubts. Gopher was a follower never a leader. Gopher had never had an original thought in his entire life. Gopher as a leader? Not going to work, but Sue had to try. It was the only option remaining other than scratching.

Sue unhooked Gopher’s neckline and brought him to the front of the team where she re-attached his neckline and hooked up his tug line. Sue took Gopher’s face in her hands and looked him straight in the eyes and said, “Gopher, if you don’t take us to Nome, we’re not going to get there.”

Sue walked to the back of the sled, pulled the snow hook and they were off. Gopher took to leading the team like a duck takes to water. Gopher took the team to Nome! 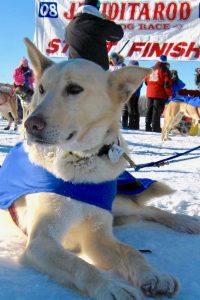 Gopher Leads in the Jr. Iditarod

Through Gopher, we can learn a valuable lesson. Never let perception limit potential.  Perception means – attitude that is based on what is observed or thought. Potential means doing or becoming something in the future. In other words, never let what you think about a person or animal limit what the person or animal might do in the future. While we might not think a dog is capable of being a leader or accomplishing something great, the dog should always be given the chance to reach its fullest potential. The same is true for people.

Gopher finished in lead in his first Iditarod and went the entire distance in lead to Nome in 2006 for Kim Kettridge. Gopher retired from Iditarod racing to lead for 14-year-old Meredith Mapes in the Jr. Iditarod.

GOPHER is a principle we can all live by.  Get Out Play Hard Earn Respect.  Get Out can mean get outside, get outside your comfort zone or get outside the box. Play Hard might also translate to work hard. Earn Respect is what happens as a result of Getting Out and Playing Hard.  Students can apply the GOPHER Principle in their lives and write/draw a story detailing what they did being inspired by GOPHER.