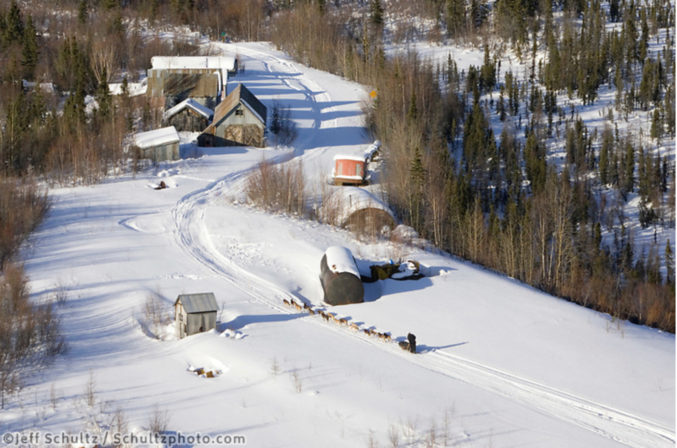 BOO!  Being that the next two checkpoints on the trail are located in GHOST TOWNS, my story should begin with a ghostly greeting!  So, what’s a ghost town?  It’s a deserted town.  The residents have left usually because their jobs no longer exist or because of natural disasters, fires or wars.  That’s exactly the case with Ophir, the gold supply just ran out and so the miners either returned home or moved on to look for gold in other places.

The trail used by Iditarod dog teams to travel from Takotna to Ophir (O-fur) follows an old mining road that was built in the 1920’s to connect Takotna and Ophir with Sterling landing.  Water levels on the Kuskokwim River were not always deep enough for steamboats to navigate all the way up river to Takotna so an alternate landing was established.  The supplies unloaded from the steamboats at Sterling Landing were then transported to the local supply center and mining towns using the road.  This “bush” road like all others in Alaska doesn’t connect to any state highway system.

In his trail notes, Don Bowers tells the mushers that as they leave Takotna heading toward Ophir, the trial climbs to the top of the divide between the Kuskokwim and the Innoko Rivers.  It’s not a serious climb, only about 800 feet over nine miles of trail.  Many teams have taken their 24-hour rest at Takotna so the dogs are ready to get up and go.  Mushers say that the view from the top of the 1,200 foot divide is very scenic. 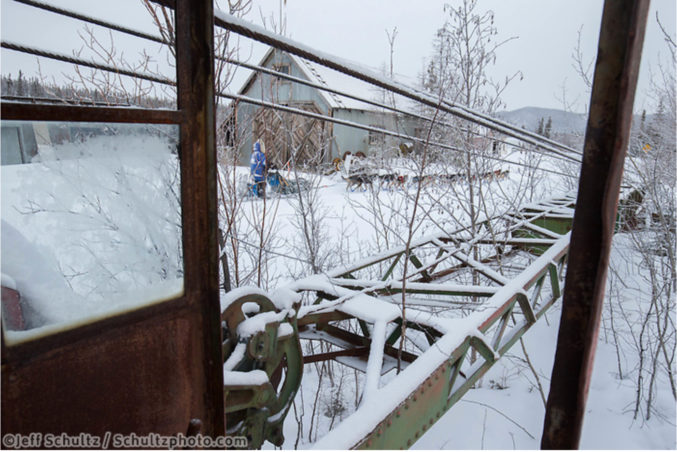 Now for a little history.  Gold miners named Ophir, Alaska after the Ophir mentioned in the Old Testament of the Bible.  Supposedly, rich King Solomon received shipments of gold, silver and other valuable items from the famous wealthy land of biblical Ophir.

Gold was first discovered in Ophir, Alaska in the late 1800’s.  At its peak in 1907 to 1908, Ophir had a population of 1,000 people and who knows how many dogs.  In gold rush towns, dogs were invaluable for hauling supplies out to the mines and gold back from the mines.  As the gold supply was exhausted, the miners and dogs moved on.  Today the population of Ophir is zero and only a few buildings, a gold dredge and dilapidated runway remain to mark the location of the once vibrant mining town.  As of 2006 small mining operations still exist along some of the nearby creeks.  Mining today is far different that it was in the early 1900’s.

The checkpoint at Ophir is located at a cabin owned by Dick and Audra Forsgren. For many years, mushers and volunteers really appreciated the big pot of stew that Audra cooked up on the wood burning stove in the cabin. Ophir Temperatures (-42 to +80) and precipitation (10 inches) will be very similar to Takotna and McGrath.

Well, there you it – some history and information about Ophir, one of the ghost towns on the Iditarod Trail.  Taking a picture of ghost is impossible.   Maybe the same is true of a ghost town, as handler had no pictures to share of Ophir.  Next Handler will tell us about Iditarod Checkpoint.  Stay tuned for that story and remember, in everything do your best everyday and have a plan.