On the Trail in Nome – Saturday

I know I have said in the past that I have had some pretty amazing days, but today was probably the best day of this entire incredible adventure.

There were so many “never in my wildest dreams” moments that I can’t possibly get them all into one post, especially as it’s already way later than I would like it to be, I am going to have to break up today into two separate posts.

Last night I met an amazing woman named Barb Moore. Barb is an Iditarod finisher from 1980. She ran the race with the legendary Colonel Norman Vaughn and won the Red Lantern that year. Long story short, we got to talking and she and Whitney McLaren worked to get me on the back of a dogsled. This morning, that happened. 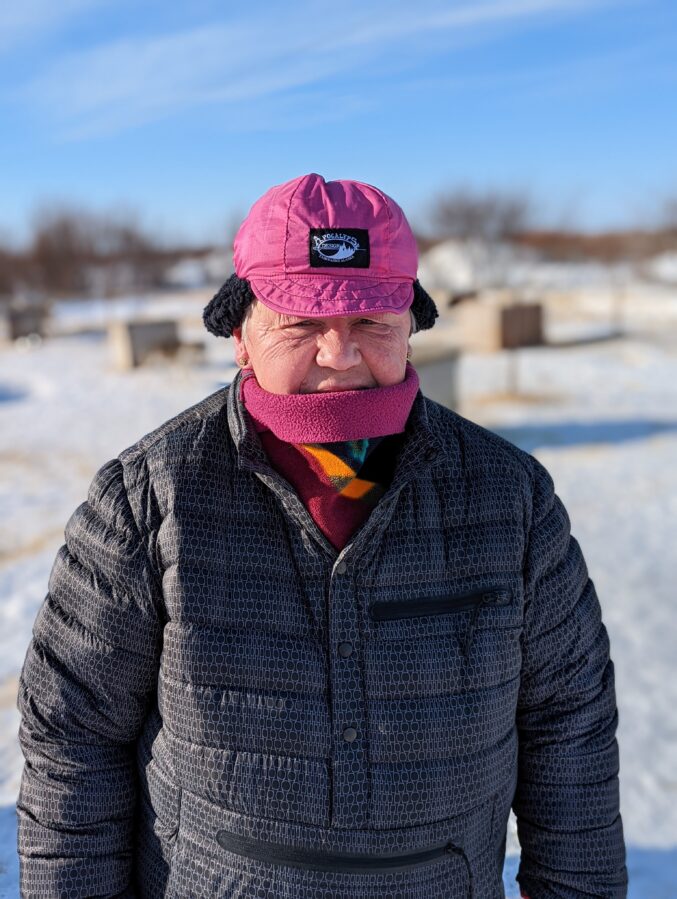 But first, I went down to the chute to watch Riley Dyche cross the finish line. After an experience of a lifetime for him in a shelter cabin near the infamous blowhole and Topkok mountain, Riley finally caught a break in the wind and took full advantage of that to finish his race at 10:30 this morning. He had 6 dogs in harness, and was warmly welcomed by friends, family and fellow mushers who were all happy to see that he was finally off the trail. 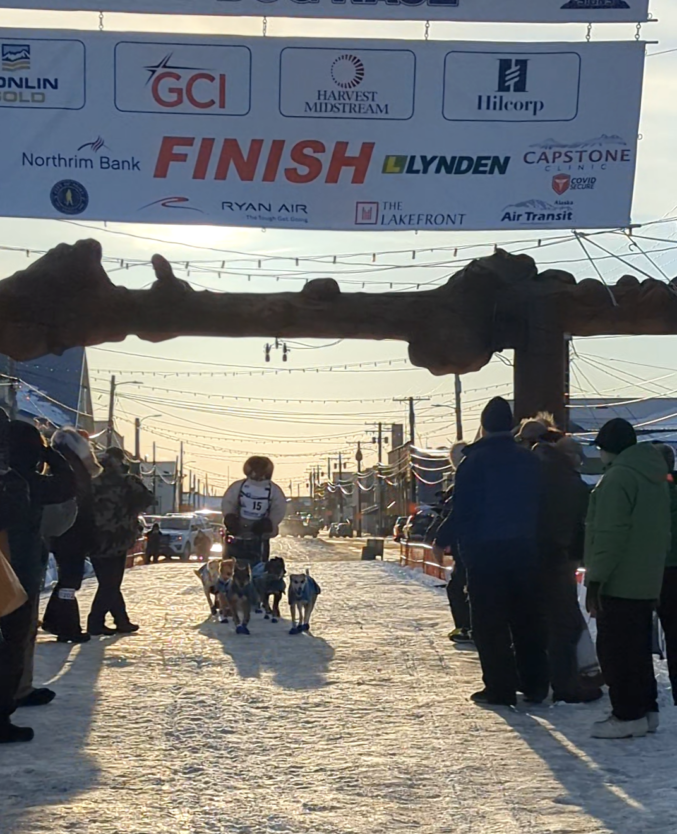 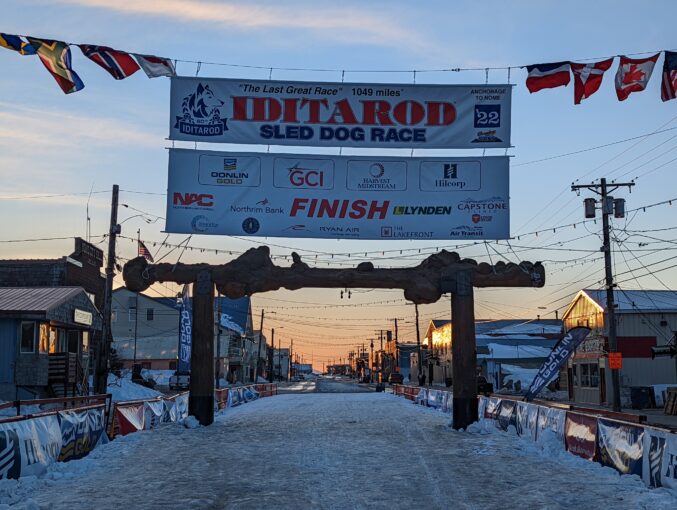 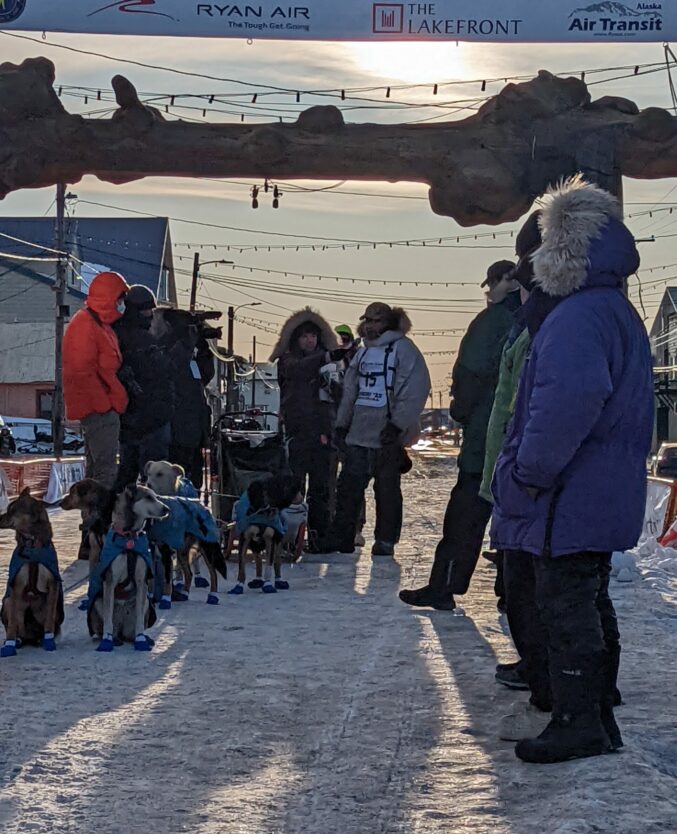 As soon as Riley’s team was headed toward the dog lot, we jumped into Barb’s car and drove 8 miles north of Nome to a small dog kennel. I have been fortunate to have had the opportunity to ride on the back of a dogsled in 2020 at the Chugiak Dog Mushers Kennel, however, I was on a trail sled. This time I was all on my own. And it was exhilarating. We got a quick tutorial from one of the handlers, and then it was time. I was the first to volunteer to go, when the dogs were well rested, and ready to roll. And they certainly were. In my 3-dog team was a 2 year old named Flodin, and next to him was Pancake. These two were my co-leaders. My one wheel dog was named mocha. Flodin was ready to go! He was jumping, and pulling, and squealing to go, so once I pulled the hook on the 2.5 mile run, we were off. The surrounding landscape was like a postcard. The rolling white hills, the willows and brush poking through the snow, and the frozen rivers were spectacular. 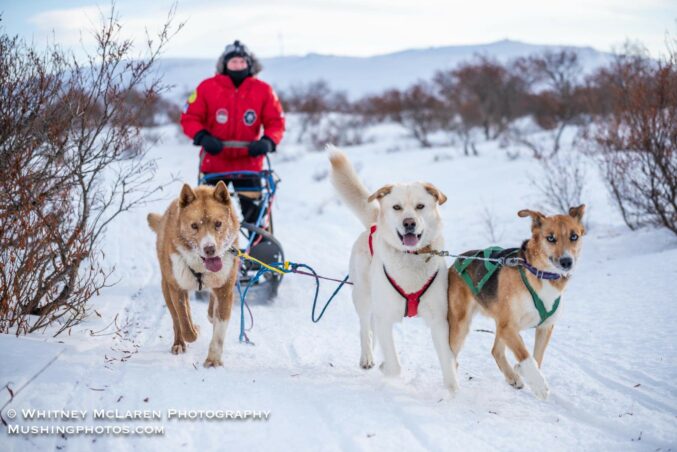 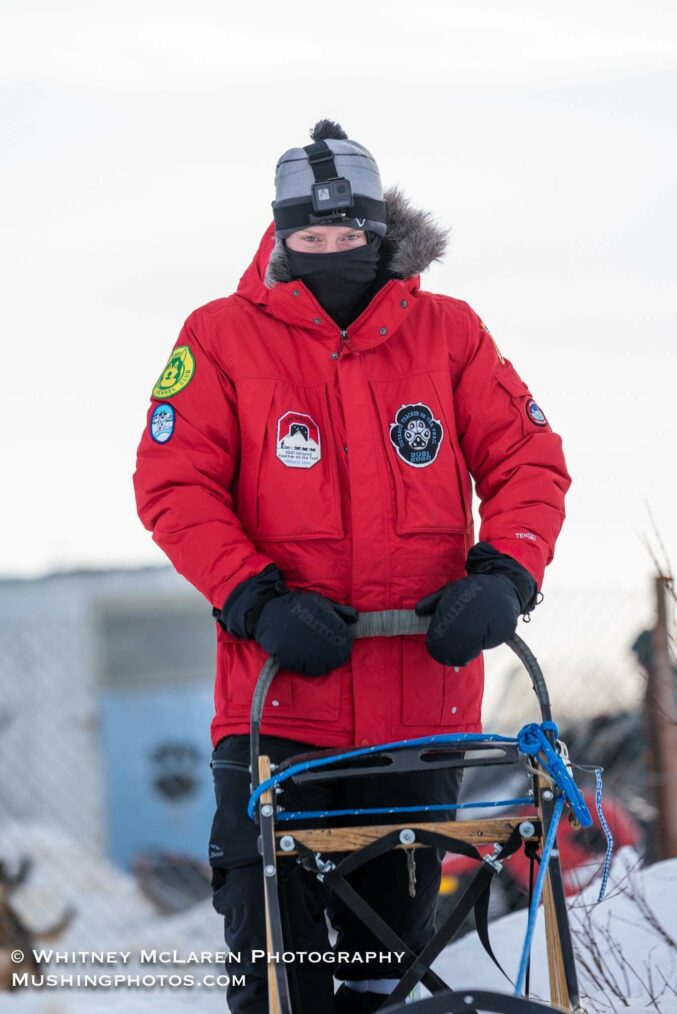 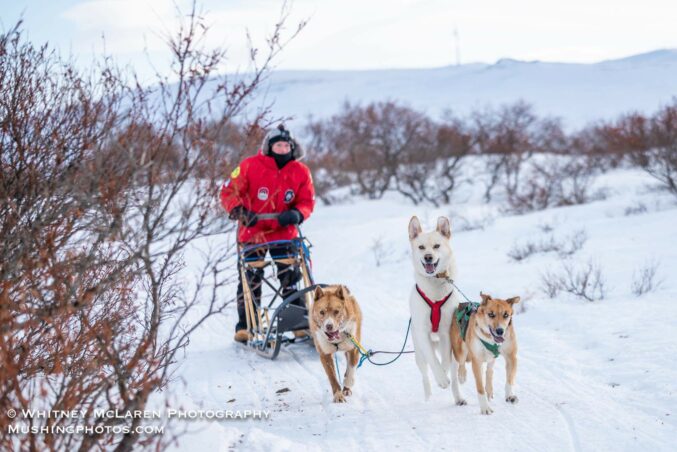 What I didn’t know, but quickly found out, was how much of a workout it was. It is not simply standing on the runners. It is (especially for a taller person like myself) crouching down and kicking out going around a turn, which causes a bit of a power slide. It is controlling the sled on the downhills, and trying to help out on the uphills. I have always told my students and kids in presentations that I am not in nearly good enough shape to be a musher, and that was proven today.

The final thing that I had the opportunity to do this (early) afternoon, was to help bring dogs off the trail. This included picking up a group of dogs from the airport and bringing them to the dog lot here in Nome. But it also included meeting a snow machine with a dog box full of dogs from a scratched team, about 7 miles south of town. Both times, I was sitting in the bed of a pickup truck, keeping an eye on all of my furry passengers to make sure they did OK on the way back to the dog lot. Oh yeah, and on the way to the airport, I had the privilege of riding with Sean Williams’ dad, and the incomparable Kathy Chapoton. For those of you who don’t recognize that name, she is the wife of Martin Buser. I had a nice chat with Sean’s dad and we talked about his moving to Alaska from Texas. We talked about my kids and related to the ages of Sean’s children. I joked that Sean has had quite a busy month as he has run the Iditarod, and had the birth of his 2nd child, only 24 days ago! Sean had also quipped earlier in the race that having a newborn gave him plenty of practice dealing with sleep deprivation on the trail. 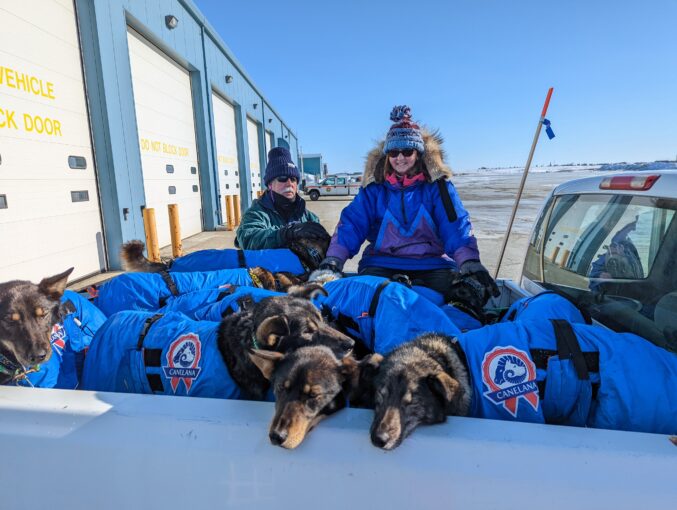 Dogs ready to head back to the lot. Photo credit: Jim Deprez 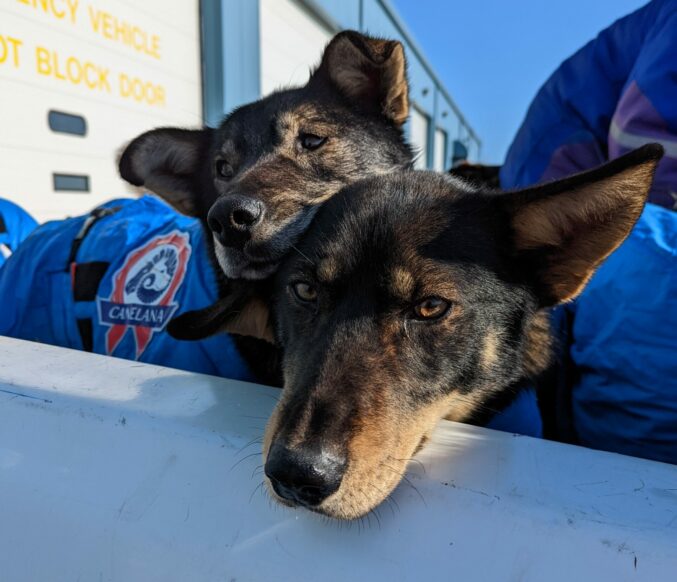 Coming back from the dog lot I ran into Jessie Holmes again, who I seem to cross paths with multiple times each day. This time after chatting about his dogs again, he invited me to meet later to talk more. I told him that I had a post to write and would like to. To which he responded by saying more reason to knock it out! As it turned out, my night had other plans. But that will have to wait for tomorrow…

Today’s adventures of Booloo came from the dog mushing this morning. Booloo was excited to got back on the trail and even got to hang out with Flodin after he led us around the trail. 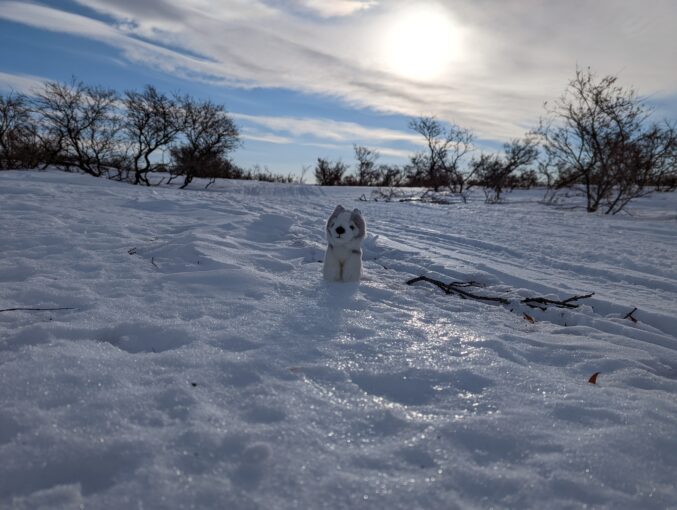 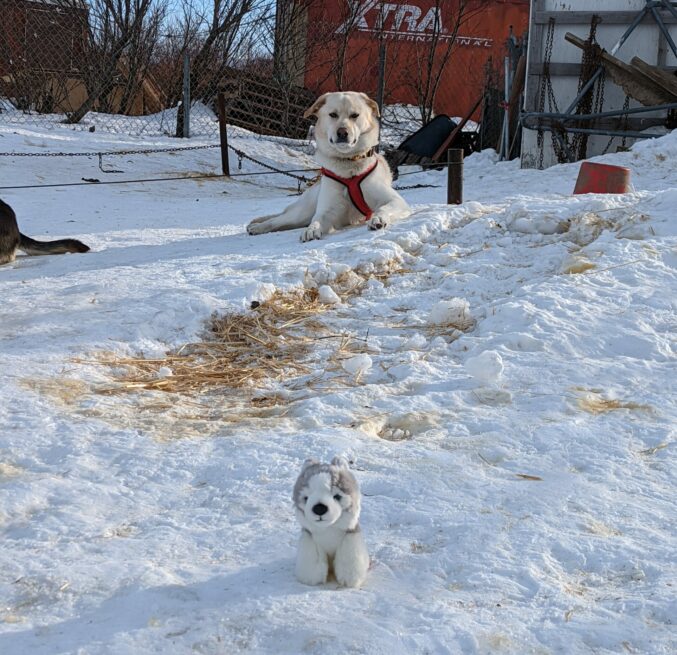 Teachers: There are some math questions that can be asked given the number of dogs in the truck today! We had 11 dogs in this picture. If that is the case, how many ears were there? How many legs were there? Now, for upper grades, add in the 2 handlers and ask the same questions (a 2-step word problem). Now how many legs, ears etc…